Does Music Stimulate Your Cannabis Plants?

One of the most talented and well-known classical composers of all time is Wolfgang Mozart. Although Mozart never smoked cannabis a day in his life, his music has made an impact on cannabis culture. One grower, in particular, told Civilized, that Mozart's music has an effect on his cannabis plants. Matthew Lopez, the lead cultivator at Denver's Northern Lights dispensary, believes classic music helps his plants flower. "It's my belief, that plants respond to ultrasonic stimulation. And I have seen my plants grow better when I play certain types of music for them." Lopez' tracklist includes Mozart's Sonatas 11, 16, and 21, but he says his plants also like to jam to some Beethoven. Specifically, the plants favor Beethoven's Fur Elise and Moonlight Sonata. In fact, Lopez' plants love Beethoven so much, that they stand taller than they do with other artists. Another grower, Elias Tempton from Denver's Sticky Buds, told Westword: "I've read that classical music has been shown to inexplicably stimulate growth in plants. My own personal opinion, I think that it really comes down to this: plants are more sensitive to your emotional state, your personal emotional state and there's just something extremely special about classical music. It's very calming, stilling." Apparently, classical music makes a big difference. However, it turns out that there are even more types of music that affect cannabis. 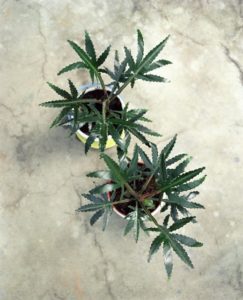 According to Matthew Lopez, his plants don't respond negatively to any music. However, it's classical and heavy metal, that they really enjoy. Not only does it help them grow, but Lopez has also seen an increase of THC since he's begun playing the music. As a matter of fact, playing music around cannabis plants has been a thing for centuries. According to Jennifer Van Evra of CBC Music, people began playing music around their plants in 1848, when Gustav Fechner, a German professor, published Soul-Life of Plants. Ever since then, scientists have been questioning whether or not there's any truth to the theory. During an episode of Mythbusters, the theory was tested and deemed "plausible" after discovering, that the music had an effect on the particular plants they were testing. In fact, it was heavy metal, that helped the plants grow. Although the episode failed to conclude how music affects cannabis, an article by Science World Report explained the matter further by mentioning vibrations and how they help a plant's photosynthesis process: “What we’ve found is that when the gaps in energy level are close to vibrational frequencies, you can have enhanced charge separation. It’s a bit like a bucket brigade: how much water you transport down the line of people depends on each person getting the right timing and the right motion to maximize the throughput. Our experiments have told us about the important timing and motions that are used to separate the charge in the photosystem II reaction center.” For the most part, growers tend to use music in their grow places, says Lopez. Moreover, he says most places have excellent sound systems and good-sized speakers.

Although it's unclear whether cannabis prefers a particular type of music over the other, there is one thing for certain: music is the ultimate stimulator. Moreover, it certainly can't negatively impact the plants in any way. Being that many people want to know an actual yes or no on the matter, more studies need to be performed. If scientists can confirm, that music does indeed help plants grow, soon growers everywhere will be turning up the Bob Marley and Snoop Dogg. SOURCE Royalqueenseeds.com
S
Soft Secrets